Barada
I am a certified New York based reflexologist providing reflexology and champissage (Indian head massage) to clients of all ages. Prior to this, I served as a Human Resources Specialist at the United Nations and worked in several countries including Chile, Guatemala, Angola and Namibia. I have a BA and Masters' degrees in Speech and Communication. I love body work, sports, music and dance and am a cyclist and competitive Latin Ballroom dancer.

Reflexology and Champissage by Barada

Peace in the world - one foot at a time 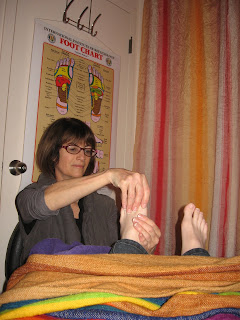 Very often I get to work on Mana's feet. And each time I do so - I am grateful for the opportunity to thank her in some way for having been one of the best bosses I ever had at the UN. Mana, still beautiful and elegant at the age of 70, is again working temporarily at the UN because, well, because the UN desperately needs her rare talent, a combination of dedication, wisdom and clear analytical thinking. Not to mention her wonderful sense of fun and humour. The very first time Mana came to see me she told me that she never goes to the bathroom while working. Maybe she thought this was a sign of her dedicated service. In response I probably mentioned that our bodies need to rid themselves of toxins and urination was one important way. Anyway, I made sure I worked on her kidney reflex area. So it was no surprise to me - although it was to Mana - that halfway through the session - she had to make a run to the bathroom. That was a good thing - the reflexology was working! And so whenever Mana is able, she comes for Reflexology and I can see that she takes it as her sacred hour of undisturbed peace and deep relaxation. Not to mention that a host of ailments she has carried over time have either cleared up or been reduced consideraby since we began working together. Mana's feet are real UN feet - they have served for many many years. This is really an example of peace in the world - one foot at a time.
Posted by Barada at 7:28 PM 1 comment:

Many lovely clients have come to the Salon these weeks but today I want to write about one in particular - a dancer named El. And her feet. El is a talented and beautiful dancer whose specialities are Tango and Theater Arts. For the latter, she pairs with a renowned partner who lifts her and throws her and swirls her through the air. So when she comes to Reflexology, there is often a story behind each band-aid and sore muscle. What is it like to work on El's dancer feet - ones that are, among other things, constantly moving in 4 inch heels and landing difficult jumps? I'll tell you. For example, yesterday El came in and reported that her lower back was sore and that her right ovary felt tender. Checking into her emotional state, El said she was a bit depressed and sensed it as a heaviness in the center of her chest. What wonderful information to work with! I started the session with gentle pressure on the solar plexus, diaphragm and heart reflex areas of El's left foot asking her to simultaneously breathe into the center of her chest. Not surprisingly, the parts of her foot that hurt and thus needed extra attention were the right ovary, the lumbar spine and adrenal reflex areas of both feet. What is unique about El, is that she brings her whole self to Reflexology. She loves herbs and natural remedies, practicing yoga and gyrotonics. These, coupled with her deep interest in returning to a state of wholeness, allow Reflexology to work in an unencumbered way. While working, I felt great peace within my own chest! When we finished, El shared that the heaviness in her chest had eased and that she felt "much better". Checking in with her at the end of that day, she reported that her entire body felt much more relaxed and that she also felt much more peaceful while going through her day - more inner. She also said she was much more energetic - less lethargic and turning the corner to start to feel excited about her weekend of performing. I know she will dance beautifully on feet that are open to the wisdom of healing.
Posted by Barada at 3:18 PM 2 comments: 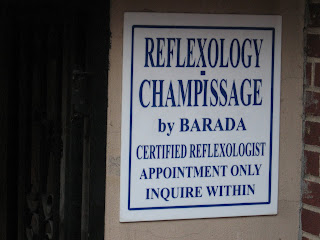 Today I worked on Kay's feet. I first met her in August 2005. A beautiful, soft-spoken and graceful woman. Then in October of that year, she had a stroke at the age of 28. Her left side was affected. The doctors said that involuntary actions such as blood pressure and her breathing were affected. Stents were put in the vertical arteries in her neck. She was lucky to be alive.
I had just completed my first Reflexology training course. Although reflexology was proven particularly beneficial for stroke patients, could I dare "practice" on a stroke victim? Her response was yes, she definitely wanted reflexology. No sooner was she out of the hospital that she appeared on my doorstep. Seeing her immediately after the stroke, it was hard to see the person I had met only weeks earlier. Her beautiful face was recognizable, but her eyes were no longer shining - she seemed to hold herself very stiffly - giving an impression of fear and hurt.
We got to work. She told me her first reaction was a feeling of warmth in the back of the rib cage. I knew we were on to something - starting at the heart "chakra". In the next few sessions, sometimes several times a week, I continued to work all relevant reflexes related to the brain and the affected parts of the body. Kay reported that her breathing improved and that , her left foot felt more alive. She also started working on her own feet. Her balance was better. In January 06, she returned to the hospital for a procedure to see how the brain was doing. I heard her tell me the following statement as though she were singing: "the team of doctors said my arteries were like new!" Her face was clear, open and bright and her eyes were shining with confidence. She said she felt like a lot of clutter had lifted from her heart.
Kay started running. She married her wonderful musician boyfriend. She received a grant to study for an MA in Santa Fe. Every time she visited NY, she came for a Reflexology session. Now living in NYC with her husband, she is addressed as Professor in a small college in NJ. Everytime I see my dear friend Kay, I remember what Reflelxology is all about.
Posted by Barada at 5:15 PM No comments:

Today at my Reflexology NY practice, I saw a lovely woman (named Em) who has had Parkinson's Disease for about 16 years. She was managing it very well until this last year when it started to take a toll on her fine motor skills and balance capabilities. Since Parkinson's has been known to respond to Reflexology and Champissage complements to allopathic medicine, I proposed that we do both in one session starting with a full Champissage massage and moving into about 10 minutes of Reflexology on each foot.
While working, I played the CD, "Relax and de-stress", an arrangement by the Apollo Chamber Ensemble performing 'psychoacoustically' arranged music of Vivaldi, Mozart, Debussy and more. The psychoacoustics - the inquiry of what happens with different sounds and rhythms - in this album was designed to soothe the heart rate, brainwaves and breath. Apparently when we are tired or stressed, our ability to perceive complex auditory data is diminished - yet the times we are overwhelmed are when the vital harmonics of sound are of greatest value. So the music on this album is purposefully very slow and easy - sonic "manna" for a fatigued nervous system. Anyway, while gently massaging Em's head and face during Champissage - I heard a beautiful sweet voice accompanying the music. Seems that she had been a singer and in the space of our work together - she was moved to sing along with a Schubert piece. After our hour long session she reported feeling deeply relaxed and feeling wonderful. Turns out that while we were working - Obama passed by the Salon on his way to a UN meeting. About an hour later - he passed by again - and I got to see him. My colleague Lee said, "he's not in a good mood today because yesterday when he passed by - he waved at us". Oh well, I did not mind because I was in a very good mood after working with Em and sharing a psychoacoustic song.
Posted by Barada at 10:19 PM No comments:

How did a year and a half pass so quickly???? 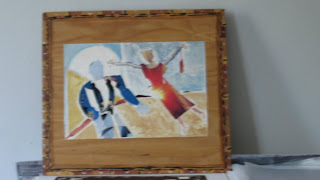 The last time I posted was in March 2009. How many dozens of feet I have worked on since that time. Every week brings a kaleidescope of clients from dear friends to UN colleagues to dancers and artists to senior citizens and children. Each person who puts their feet into my hands - inspires me, teaches me and challenges me. Just yesterday NH came for Champissage. N, a well-known and very accomplished artist suggested we do a "swap", that is, a piece of her art work for several Reflexology or Champissage sessions. I was delighted but not sure how Reflexology could possibly compensate for her amazing artwork - which she sells anywhere from a few hundred to several thousand dollars a piece. Well, I proceeded to spend several hours at her studio (it would take days really) and found something so perfect - just touched my heart and soul - a really beautiful piece of artwork. Money was not the issue here. We traded gifts of the heart. P.S. This is not to say I dont work for money - I do. And everyone finds my prices very fair. But every once in a while - the opportunity for a "swap" comes along and in this case - it was superb!!
Posted by Barada at 10:27 PM 1 comment: